A Note from Arnold August:

Professor Erin Redmond contacted me a short while ago inviting me to present my third book on Cuba at the university where she teaches. Professor Redmond wrote that she uses part of my second book, CUBA AND ITS NEIGHBOURS: DEMOCRACY IN MOTION in her course “Cuba: Film since the Revolution.”

Erin Redmond received her Ph.D. in Hispanic Literatures from the University of Texas at Austin in 2008. She completed her B.A. in Women’s Studies and History at the University of Toronto. Dr. Redmond is currently an Associate Professor of Spanish in the Division of Modern Languages at Alfred University. Her research and teaching interests include questions of gender and sexuality in film and fiction from Argentina, Brazil, and Cuba. Most recently, her research has focused on representations of migration in Cuban film from the 1960s to the present.

I would like to thank her, the Global Studies Program for presenting the event, the College of Liberal Arts and Sciences for sponsoring, and the University technician for creating this poster. 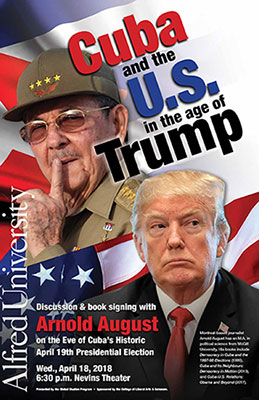 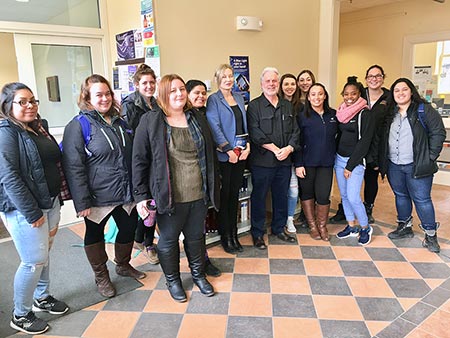 After a short introduction followed by a lively question and answer period: a joint class composed of an upper-level survey course, conducted in Spanish, entitled Latin American Culture & Literature II; the other, the Global Studies senior seminar, which is for seniors majoring in Global Studies.

Hello everyone and welcome. We’d first like to thank all of you for joining us for this great opportunity as the Global Studies program at Alfred University presents a discussion by Arnold August titled “Cuba and the U.S. in the age of Trump.” And sincere thanks to the College of Liberal Arts and Sciences for sponsoring our guest speaker tonight.

Our speaker is an established author and journalist from Montreal with a Masters in Political Science from McGill University. Arnold August has spent many years conducting research on global issues, particularly focused on Latin America. He has also written articles for online journals, spoken at colleges and universities around the world, given interviews for radio and television programs, and written several books regarding international affairs, with special interest in Cuban and U.S. relations.

His books include Democracy in Cuba and the 1997-98 Elections, Cuba and Its Neighbours: Democracy in Motion, Cuba y sus vecinos: Democracia en movimiento, several other works in Spanish, and his most recent book published in 2017 Cuba-U.S. Relations: Obama and Beyond, on which this talk is based.

Much of his research comes right from his point of interest: Cuba. He has traveled to Cuba to conduct research and gain a new perspective on relations between Cuba and the U.S. His research clearly shows how these two countries, though so close together, have much different versions of history.

Cuba-U.S. Relations: Obama and Beyond analyzes the evolution of Cuban and American government interactions from the perspective of Cuba, how reality is much different than what we see on U.S. TV or social media. By looking at the history of our relationship with Cuba from a different angle, August highlights critical arguments that many people on this side of the gulf have never heard of.

His book examines both sides of countless conflicts regarding foreign policy; conflicts from the embargo, to the missile crisis, to Guantánamo, and beyond; all leading up to what Cuba is facing today; a “cultural war”.

August wants to emphasize how our history of diplomacy with Cuba has greatly influenced the relationship today in the age of Trump. He stresses the importance of recognizing how certain cultural factors and events in history have led to specific policies and changes being made today.

Tomorrow, August will be heading to Washington D.C. to discuss this historic event in a series of interviews, and what it means for the Cuban people. We are very honored to have him here to share some of this insight with us tonight.

In 1891, in his famous essay “Our America,” the great Cuban hero José Martí warned Cuba of the possible threat of the “colossus to the north,” the United States, as an economic and cultural invader. But Martí also offered hope, suggesting that instead perhaps, the U.S. would choose to get to know Cuba. Tonight, we are all fortunate enough to have that opportunity; to get to know Cuba.

On behalf of the Global Studies program here at Alfred University, we would like to present Arnold August. 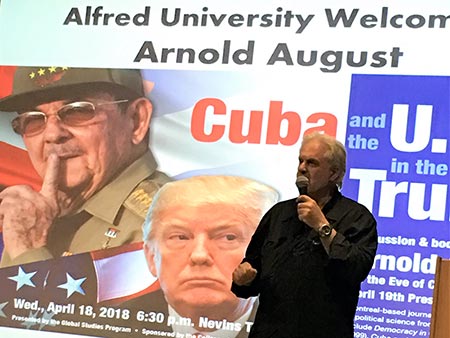 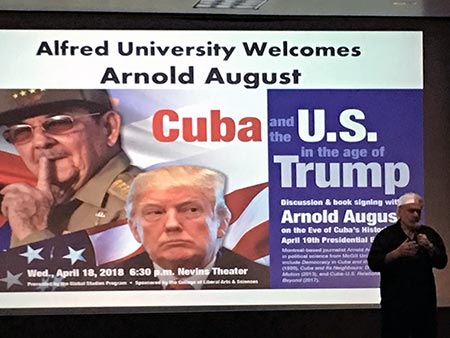 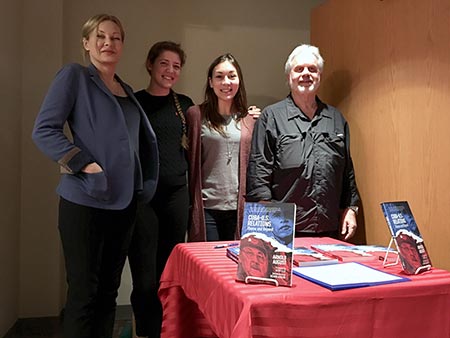